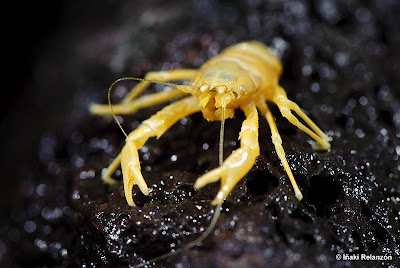 In honour of Karen & Richard return, today's unusual animal of the day is the blind albino cave crab.

This species, which is in fact a squat lobster and not a crab, live solely in the caves of Jameos del Agua in Lanzarote. The lava tubes in which they reside were formed more than 3,000 years ago, when sea water flooded into the caves during volcanic eruptions.

The Blind Albino Cave Crabs are unique to their environment. So little has been documented on them, even the tour guides tell that they have never seen them eat, never seen any eggs, and have never found a dead specimen, which (if true) would suggest they may live for very long periods of time. Although intriguing, it appears to be false.
Posted by Emma at 05:56